For Older Patients, an ‘Afterworld’ of Hospital Care

Long-term care hospitals tend to the sickest of patients, often near the end of their lives. Many will never return home. 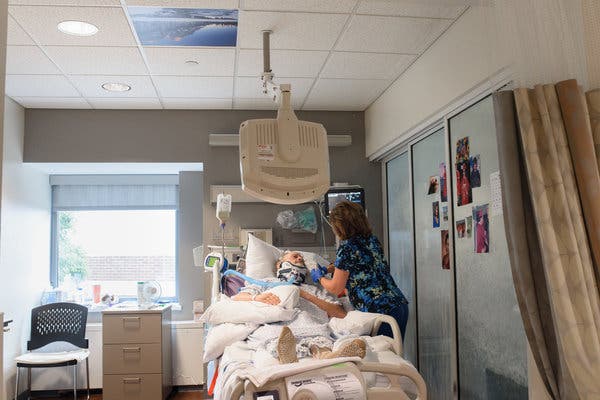 The Hospital for Special Care in New Britain, Conn., had 10 patients in its close observation unit on a recent afternoon. Visitors could hear the steady ping of pulse monitors and the hum of ventilators.

The hospital carefully designed these curtained cubicles to include windows, so that patients can distinguish day from night. It also placed soothing artwork — ocean scenes and landscapes — on the ceilings for those who can’t turn over and look outside.

All these patients had undergone a tracheostomy — a surgical opening in the windpipe to accommodate a breathing tube attached to a ventilator — when they arrived from a standard acute-care hospital. Some had since been weaned from the ventilators, at least for part of the day.

The facility is called an L.T.C.H., a long-term care hospital (also known as a long-term acute care hospital). It’s where patients often land when an ordinary hospital is ready to discharge them, often after a stay in intensive care.

But these patients are still too sick to go home, too sick even for most nursing homes.

“It’s truly a hidden segment, even to most people in health care,” said Dr. Anil Makam, a hospitalist and researcher at the University of California, San Francisco.

Take the man in his 60s slowly making his way down the hallway, supported by a large wheeled apparatus that had also lifted him out of bed. Two physical therapists and two aides accompanied him.

He had been in the nonprofit Hospital for Special Care for about a month, on top of 30 days in a standard hospital, trying to recover from a brain hemorrhage and spinal cord injuries after a fall down the stairs in his home.

He had finally come off the ventilator the week before, although he might need it again. “Setbacks are very common,” said Dr. John Votto, a pulmonologist and former chief executive of the hospital, watching the patient’s progress.

In one cubicle lay a woman with severe emphysema who had endured six hospitalizations in five months. “She’s off the vent, but she’s very tenuous, in and out, in and out,” Dr. Votto said. She hadn’t been home since January.

Close to 400 such hospitals operate around the country, some free-standing, others located within other hospitals, most for-profit. They provide daily physician visits, high nurse-to-patient ratios and intensive therapy.

In 2017, they accounted for about 174,000 hospital stays. Medicare covered about two-thirds of them, at a staggering cost of $4.5 billion, the Medicare Payment Advisory Commission has reported. 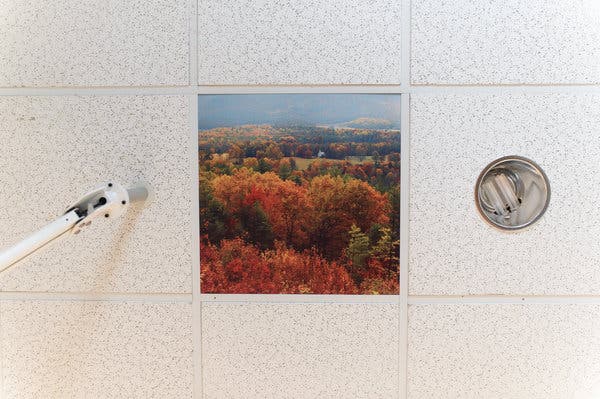 Artwork in the hospital’s ceiling tiles for patients who are immobile and can’t look outside.
Credit: Monica Jorge for The New York Times

Yet the odds look dismal for older adults who enter an L.T.C.H., Dr. Makam and his colleagues reported in a recent study in the Journal of the American Geriatrics Society.

Sampling 5 percent of Medicare data, they identified more than 14,000 patients who had been transferred to such hospitals and tracked them for five years, from 2009 through 2013. Most had not needed mechanical ventilation.

Only 45 percent of Medicare patients were alive a year after admission, the study found; fewer than 1 in 5 survived for five years.

The researchers defined “recovery” as logging 60 consecutive days without entering a hospital or nursing home — “a pretty low bar,” Dr. Makam said. But over five years, more than half of Medicare patients in an L.T.C.H. never reached it.

Moreover, “true recovery rates — getting back to thinking clearly and functioning well — may be lower,” Dr. Makam said.

In fact, despite the prevalence of aggressive, life-prolonging procedures like feeding tubes, ventilators and dialysis, L.T.C.H. patients spent two-thirds of their remaining lives (the median survival period was 8.3 months) in institutions, including hospitals, skilled nursing homes and rehab facilities.

“A little over a third of people never make it home,” Dr. Makam said. “They go back and forth between the L.T.C.H. and hospitals and nursing facilities, and they die in one of them.”

Younger patients in their 60s and those admitted with musculoskeletal diagnoses, like complications from a hip fracture or joint replacement, fared better. But 41 percent of this population was 80 or older, and “the older old do exceptionally poorly,” Dr. Makam said.

A few years back, Dr. Daniela Lamas, a critical care specialist at Brigham and Women’s Hospital in Boston, found herself wondering about what she calls “this afterworld,” one she knew little about.

At an L.T.C.H., she interviewed 50 patients, with an average age of 63, who had undergone tracheostomies, or family surrogates (when patients couldn’t communicate), asking not-very-medical questions about goals, fears and understandings.

Patients described their quality of life as poor, complaining of hunger, thirst, difficulty communicating. “People were bored,” Dr. Lamas said. “They couldn’t move. There was a deeper sense of being alone, feeling trapped.” Their families felt anxious and stressed.

Most patients expressed optimism about returning to their former lives, and hadn’t talked with their L.T.C.H. doctors about what would happen if they encountered setbacks.

But when discharged, only 20 percent went home; most moved to nursing homes or returned to acute-care hospitals. Just 38 percent were at home after a year; 30 percent had died.

Once, the L.T.C.H. was among the fastest-growing sectors of the health care industry. Their numbers jumped from 97 hospitals in 1992 to 388 in 2005, “a period of explosive growth spurred by overpayment and inappropriate admissions,” the advisory commission said.

Medicare responded with moratoriums on new facilities and stricter patient criteria for reimbursement. The growth of Medicare Advantage plans, less likely to reimburse for L.T.C.H. care, has also hurt revenues.

As a result, more of these hospitals have shut down than opened in recent years, and the National Association of Long Term Hospitals expects further closings.

Such hospitals cluster in certain states, particularly Texas, Louisiana and Ohio, while other states have none (Maine, New Hampshire, Vermont) or few (New York State has one). That distribution, which largely reflects whether state regulators insist that hospital developers demonstrate the need for new facilities, also affects how likely patients are to enter them.

Now, stricter patient criteria mean that patients in an L.T.C.H. will be sicker still. “They may have even poorer prognoses than the sample we looked at,” Dr. Makam pointed out.

All of which should prompt frank discussions among families, doctors and patients about whether a frail older person leaving an intensive care unit or standard hospital truly wants to spend another month or more in an L.T.C.H. and then move to a nursing home, which is the likely scenario.

“Some people may change directions and choose hospice care instead,” Dr. Makam said. But compared to patients in the general Medicare population, far fewer L.T.C.H. patients enroll in hospice, although many would qualify as terminally ill.

“It’s easy for this move to be like a train you get on until it stops,” Dr. Lamas said of L.T.C.H. stays. “But the doors can open at any point.”

She urged patients and families to arrange for periodic re-evaluations. “At four weeks or eight weeks, where do we hope we are? We can reassess.”

Dr. Votto, also chief medical officer of the industry association, endorsed that idea. “You’re at a level of illness where there’s not a lot of good outcomes, no matter what,” he said.